Warrug.com gets a lot of traffic, but what was the most viewed file in September 2018? A blog post from 2006 about regular rugs we were selling  at the flea market entitled contained one photo that has achieved an obscure internet fame.  The Mashad rug we were selling looked just like the rug which The Dude took of the Big Lubowoski (and Maude stole back.)

Well here it is again: 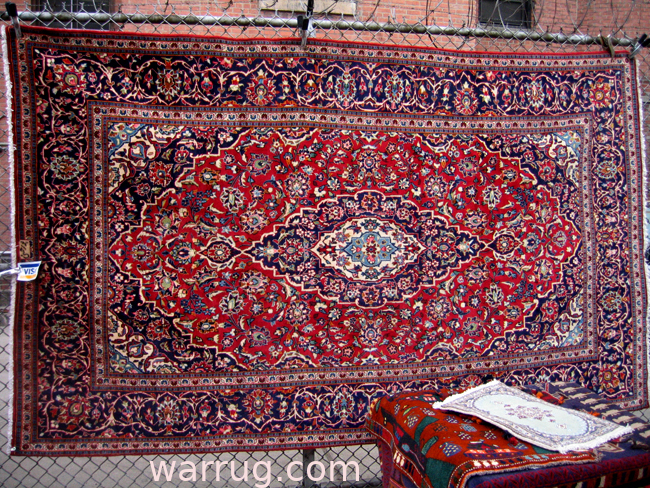 Funny thing is, I do not know who is using the photo, or where on the internet is posted.

The Metropolitan Museum in New York has made a tremendous contribution to the public domain by releasing hundreds of thousands of photos under a Creative Commons Zero license.  The Museum has made available a wealth of information licensed for almost any use.   Here are a few examples found in a search for “weaving”. I received an excellent question from our contact form recently about the lack of Red Rugs available for purchase on warrug.com lately. Below is was my response:

Your question about Red Rugs is a good one. Red Rugs were woven by refugees, primarily Turkmen, in Pakistan during the 1990’s. Since the US forced the Taliban from power in 2001 Turkmen refugees have been returning en masse to their traditional homes in Afghanistan, largely because ISAF offers them sufficient protection from the Taliban ethnic cleansing which drove many families to Pakistan during the 1990’s.

The effects of the Turkmen weavers returning to their homes in Afghanistan is, primarily, two fold. First, as refugees, if one was an engineer, one wove carpets. If one was a doctor, one wove carpets. Now the doctors and engineers are returning to their professions, so there are less weavers available to weave any type of rug. Secondly, many Turkmen weavers who wove Red Rugs in Pakistan are now weaving traditional designs or new variations of traditional designs (Khul Mohammadi mostly).

Much of the Pakistan production has moved to Afghanistan (Khul Mohammadi, Kazak, Vegetable Dye ‘Peshawar’) with the returning weavers, but not Red Rugs. I have not seen any Red Rugs produced in Afghanistan since 2001. In short, there is no more supply of Red Rugs. Occasionally I find a few Red Rugs and I post them, but they are scarce.

Lastly, this elimination of a design is not unique to Red Rugs, yet it continues to surprise me. Almost every war rug “pattern” has its moment of production, which then fades or stops. What is freely available one year, is totally unavailable the next year. Soviet Exodus rugs are one example and WTC rugs to a lesser degree.

Again, thank you for your question. Please write back if you have any further questions or comments. Here is another example in the continuing series exploring how traditional Baluchi designs have morphed into war rugs. Man in Front of Pool

Some earlier examples of traditional Baluchi patterns morphing into war rugs are: Murray Eilland’s Shindani rug with camel, a round vase of flowers pattern, Checkered Flowers pattern, also called Lateef Khel, Two Deer patern, Vase of Flowers, and a pattern from the Weavings of War exhibition. This Mario Rug in the style of Super Mario Brother 3 shows Mario riding a white horse. The horseman is the original figurative image found in carpets. Horsemen are found in the wolrd’s oldest carpet, the Pazyrik, from the 5th century BC. This ancient image, the horsemen, coupled with an icon of digital culture, Mario, is beautiful. The original post of this rug, years ago, including size, structure, photos, and description is here.

This rug is on loan to an exhibition at The Miami University Art Museum. The exhibition will feature approximately 70 war rugs that warrug.com is honored to have lent to the museum. More exhibition information, including dates for symposium and gallery talk by Kevin Sudeith, here

Note: This is a tribal rug, reflecting one weavers artistic vision. This rug was selected, with 25-30 others, from a collection of traditional design Afghan Baluchi rugs from Herat and Farah. All the other rugs were of traditional designs bearing no war motifs or western images. This Mount Fuji rug is new and roughly 1M^2.$150. It shows a simplification and abstraction from a rug like: Super fine, roughly 5×7, $1400
The new Mount Fuji rug also links to a more abstract group of small Baluchi rugs. Similar too below, but with red and blue minarets in foreground. Rug 465
Here is an example of the more abstract group referred to above which were more common 6 to 7 years ago. The new rug provides a link to understanding the imagery in the rugs like 465. The Mushwani type two minaret mosque borders are noteworthy in the large fine Mount Fuji rug as well as rug #465.