This is not the focus of Warrug.com, but twenty years ago we picked up this rug, and now it is time to downsize.

The details are in the link: Rug #2122, Antique Daghestan Prayer Rug. The price is $3,500, so contact us if you are interested in purchase, and we will send a PayPal invoice. 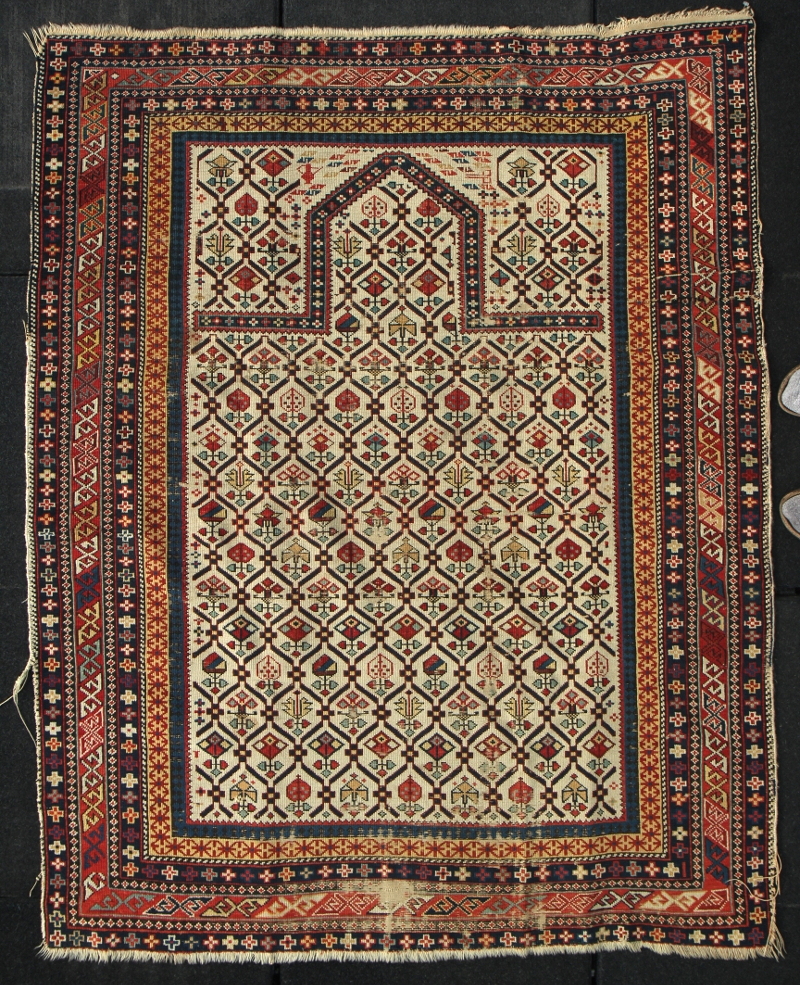 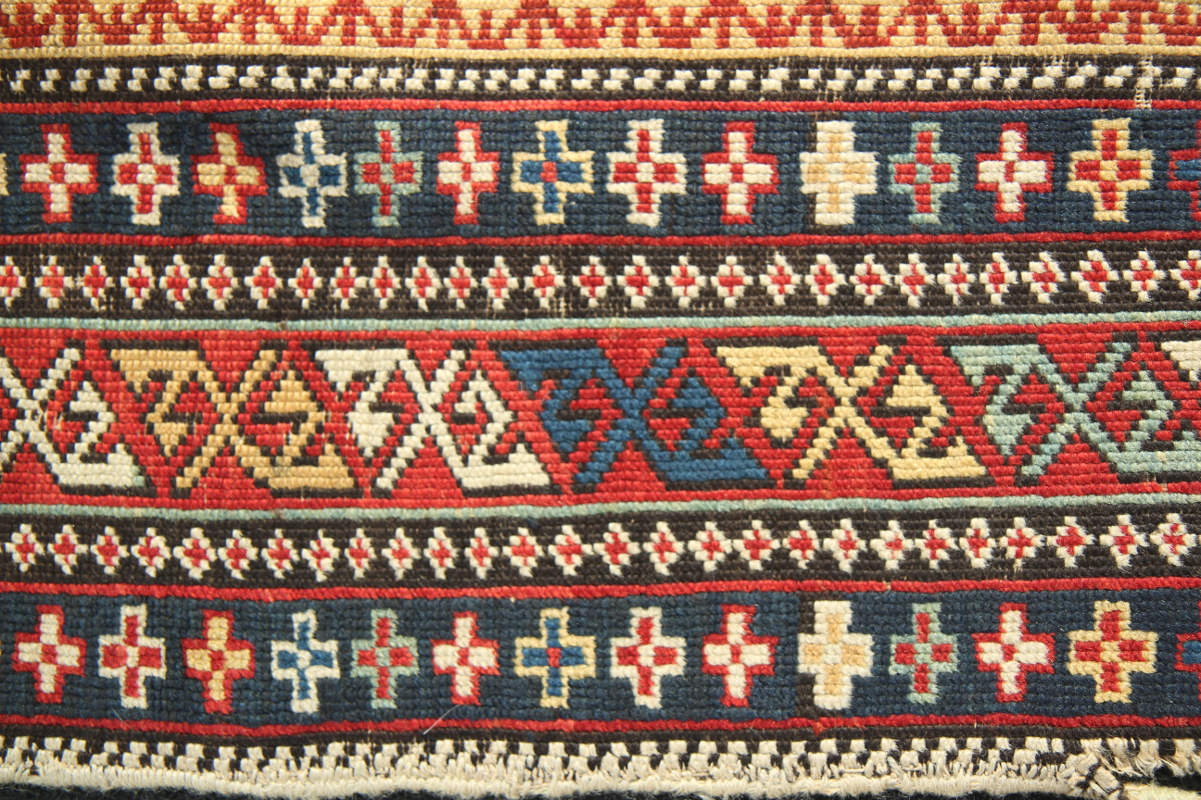 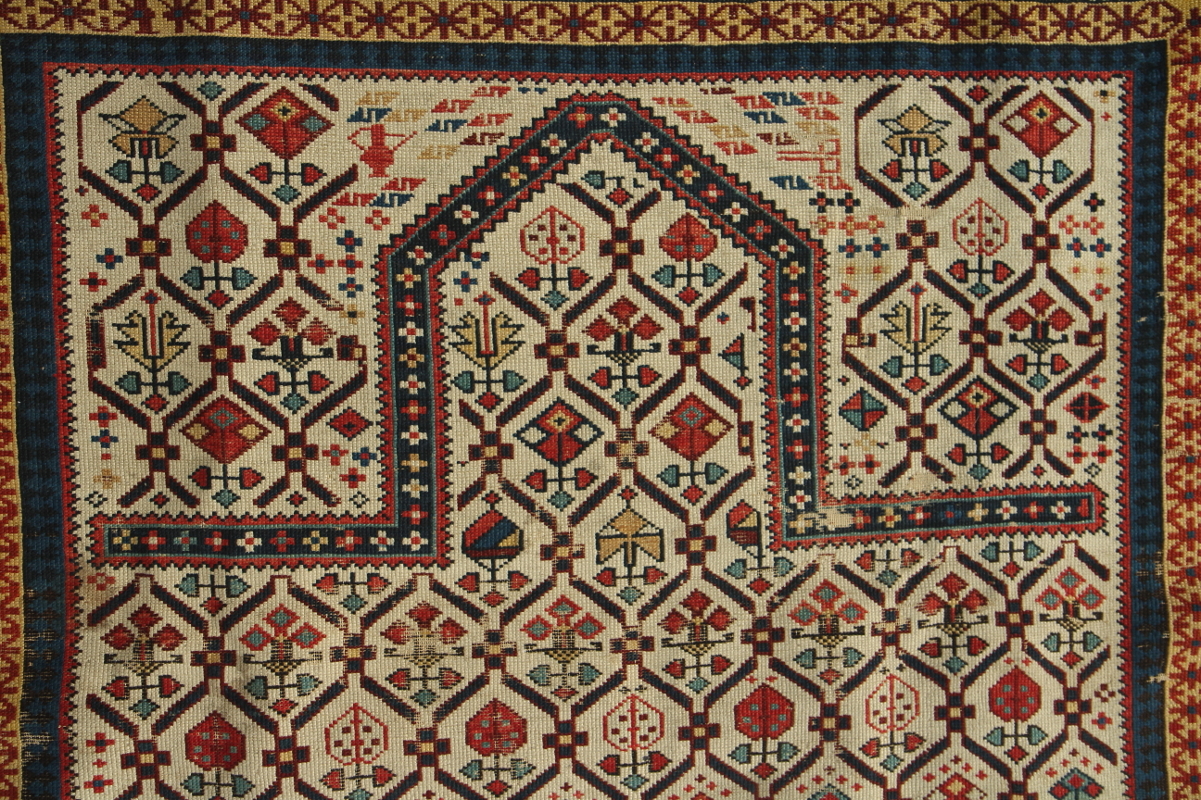 I received an excellent question from our contact form recently about the lack of Red Rugs available for purchase on warrug.com lately. Below is was my response:

Your question about Red Rugs is a good one. Red Rugs were woven by refugees, primarily Turkmen, in Pakistan during the 1990’s. Since the US forced the Taliban from power in 2001 Turkmen refugees have been returning en masse to their traditional homes in Afghanistan, largely because ISAF offers them sufficient protection from the Taliban ethnic cleansing which drove many families to Pakistan during the 1990’s.

The effects of the Turkmen weavers returning to their homes in Afghanistan is, primarily, two fold. First, as refugees, if one was an engineer, one wove carpets. If one was a doctor, one wove carpets. Now the doctors and engineers are returning to their professions, so there are less weavers available to weave any type of rug. Secondly, many Turkmen weavers who wove Red Rugs in Pakistan are now weaving traditional designs or new variations of traditional designs (Khul Mohammadi mostly).

Much of the Pakistan production has moved to Afghanistan (Khul Mohammadi, Kazak, Vegetable Dye ‘Peshawar’) with the returning weavers, but not Red Rugs. I have not seen any Red Rugs produced in Afghanistan since 2001. In short, there is no more supply of Red Rugs. Occasionally I find a few Red Rugs and I post them, but they are scarce.

Lastly, this elimination of a design is not unique to Red Rugs, yet it continues to surprise me. Almost every war rug “pattern” has its moment of production, which then fades or stops. What is freely available one year, is totally unavailable the next year. Soviet Exodus rugs are one example and WTC rugs to a lesser degree.

Again, thank you for your question. Please write back if you have any further questions or comments.

Here are four rugs woven by two weavers of one pattern. The two pairs have distinctly different structures and materials, but each pair’s material, color, drawing, border, handle, knotting, and selvedge is consistent. Note inverted red helicopter in Camel 1.

Interestingly, in Murray Eiland’s Oriental Rugs, 1976 edition, on page 83 is a rug of this design attributed Shindand, mid twentieth century. ‘Camoflage Helicopter’ named for harlequin-esque rendering on helicopters. These were readil available in 1999 and 2000. They are like “Classic” red rugs, but not quite as finely knotted. Joanne Warfield’s photographs of Afghanistan are beautiful, and this group is important.

I asked permission to take photographs, which was kindly granted to me. I knew at the time that this was a unique and special honor.
[…]
so this incredible opportunity to photograph the tailorâ€™s family was a very special one indeed. And, little did I know at the time what a rare event it really was. The whole portfolio is worth viewing. His book” The tools for carpet weaving are simple and few. There’s the loom, in a horizontal position. The weaver squats on the finished carpet as she weaves. She ties new knots of dyed yarn along the edge. She trims the tied knot with the curved knife. Then she tightens the finished row of knots with the long-handled comb. Then, she further trims the area she just finished with the scissors, maintaining an even pile on the whole carpet.

Lion Brand’s Design team had prepared gift bags of basic yarns in subdued colors, thinking that these would be in keeping with their guests’ cultural tastes but were surprised to find that the Afghan women were excited by the novelty ribbon and fur yarns in bright colors and especially the whimsical garments and stuffed animals for children that they saw on display.